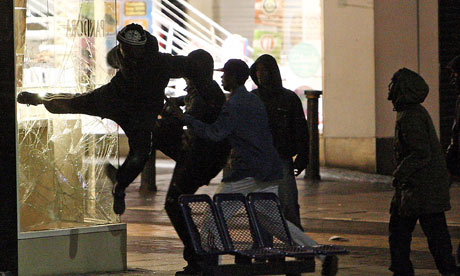 photo: David Jones/PA from The Guardian Aug 11th
One grimly humorous moment in the London Riots was video footage by a journalist with a "well-bred" voice chasing along the street after a young girl who was carrying a huge flat-screen TV. Asked why she was doing it she said she was "taking back her taxes". Several people have accused her of hypocrisy since they're pretty sure she doesn't work or pay taxes. But of course in gang-speak "tax" means to steal:


URBAN DICTIONARY
She was quite literally carrying her taxes home. But the humour gets grimmer still once you recall that the US government has recently been reduced to impotence and near default by a group of Tea Party Republicans who actually share this young girl's attitude to tax - that it's simply theft. (Perhaps Sir Philip Green shares it too, though not in public). It seems the understanding that taxation is the price of civilisation is vanishing from all levels of society. A very modern form of barbarism, the proud result of the neo-liberal project to replace all social solidarity with market values.

David Robins and I caught a whiff of this attitude when we were writing Cool Rules back in 1999:

"Cool is an oppositional attitude, an expression of a belief that the mainstream mores of your society have no legitimacy and do not apply to you."

"Cool has a dangerously ambivalent attitude toward the rule of law and could accommodate to criminal neo-feudalism just as well as it does to consumer capitalism - the uncomfortable truth is that,compared to the excitements of the drug and gun culture, a prosperous, well-ordered society is boring . Fukuyama takes a rather Panglossian approach to such matters - so far as Cool is concerned history isn’t just over, it is the ultimate negative, something that is washed up, finished with, as in ‘Bang! You’re history’."

"Cool may once have been an expression of rebellion but it is surely not any longer. The real question is whether or not it can sustain the key elements, the rule of law and freedom of conscience, that make western democracy the least bad form of government ever invented. The picture is murky and contradictory: on the one hand Cool values personal freedom above all, it hates racism, it is egalitarian and hedonistic in temperament, on the other hand it is fascinated with violence, drugs and criminality, and mesmerised by the sight of naked power. "

More recently Will Davies, on his excellent Potlatch blog, has been developing the concept of the "criminal consumer", a type of individual whose presence is equally discomfiting to politicians of both Left and Right.  (Of course Proudhon was there long before all of us with his "Property is Theft!")
The digital revolution has been eroding people's respect for property for several decades now because digital goods are weightless and stealing them might deprive their owner of revenue but not of the original article. However there's no indication that anyone has yet discovered a workable formula for living together in large groups without property, law and taxes. I fear the outcome will be a harsh authoritarian crackdown in which those who own much property privately hire the hardest and meanest to keep it out of the hands of the rest of us - dissatisfaction with the current police force (a public good as well as an instrument of control) is palpably spreading.
POSTSCRIPT: The furore over David Starkey's supposedly "racist" remarks on Newsnight about white kids "becoming black" highlights a real problem for the Left. Starkey was quite correct in his analysis, which was cultural rather than racial. He deprecates gangsta culture, and quite rightly identifies it as a central factor in these riots. This is very inconvenient for liberals, and particularly for some Guardian writers, who have uncritically embraced this culture (which is perhaps the most important contemporary manifestation of the attitude we called Cool).
at August 12, 2011