"Just because you're paranoid, it doesn't mean they're not out to get you!"
Anon

To be frank I can't be arsed to Google for long enough to discover the originator of this well-known aperçu (it may have been Joseph Heller, it certainly wasn't Nirvana, though they did put it into a song). All that matters about it to me is that while I once thought of it as a joke, I've recently begun to consider it as a profound truth. And I'm not talking, as you might perhaps expect, about the NSA and GCHQ and their clandestine mass surveillance of our communications. I'd accepted long ago that was happening, and what's more - regardless of whether you accept them or not - there are publicly-aired justifications for such actions as necessary functions of the modern State.

No, I'm talking about an altogether deeper and more dangerous kind of paranoia, on a par with "The Protocols of the Elders of Zion", the Zinoviev letter or the Fu Manchu novels, fantasies about tiny cabals of malign actors who have the power to alter the course of history. As a marxisant social commentator I've spent the last 50 years rejecting, refuting (perhaps even pooh-poohing) all such paranoid theories. Capitalism isn't a thing, let alone a person who could have malign intentions. It's a form of organisation of human labour that has no overall director apart from abstract property laws, and which follows its own unpredictable logic to produce a multitude of different outcomes, some better, some worse, for some people and not for others. This tendency to imagine dark conspirators plotting the spread and development of capitalism is something I've been resisting for most of my life.

So what happened to make me start doubting the viability of such scepticism? It was reading Paul Krugman's review of Thomas Piketty's seminal book "Capital in the Twenty-First Century" in the New York Review of Books. But surely neither Krugman nor Piketty is a conspiracy theorist? Of course not. What Piketty has done is analyse the overall development of capitalism over the last centuries, using new and powerful analytical tools. What Krugman's review does is to explain Piketty's analysis with admirable clarity, and bring out its social implications, which are so alarming that it was they that introduced this doubt into my mind. Given the facts presented in this review (I've yet to read Piketty's book itself: regrettably too busy for next few months), the only way I can explain Krugman/Piketty's findings to myself is by supposing that the financial crash of 2008 may have been in some way an act of deliberate sabotage by some conscious group of actors, rather than just the working out of impersonal market forces.

Krugman's excellent review is entitled "Why We're in a New Gilded Age", a nod to one of the key facts emerging from Piketty's analysis, namely that income inequality is set to revisit levels last seen during the first US Gilded Age between 1870 and 1910. That was the period when the great monopolistic fortunes were being accumulated in oil, railroads, steel and banking by family dynasties like the Rockefellers, Mellons, Carnegies and Morgans. I won't waste space and your time by repeating all the facts Krugman picks out here: do try to read his review for yourself. He reproduces a pair of Piketty's graphs that plot After Tax Rate of Return to Capital and Growth of the World Economy from antiquity (0 BCE) up past the present day and projected forward to 2050: 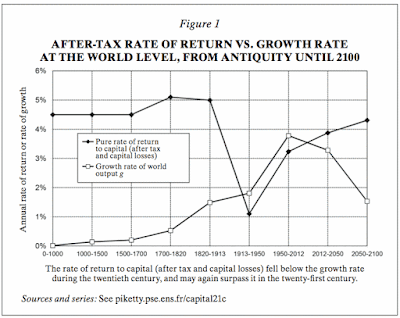 The profit graph is nearly flat for most of recorded history, with only a shallow rise from the Renaissance to World War 1, then a precipitous V-shaped descent spanning the whole 20th century which represents the dramatic decrease in inequality between the two world wars caused by the power of organised labour. The growth graph rises steadily from the 1500s up until the 1970s, a steady 500-year increase in equality caused by growth spreading wealth more widely.

That growth rate has been declining now for more than 60 years and the graphs crossed sometime in the '80s so that by 2050 Piketty projects that inequality will be back to levels not seen since 1820. There's a significant difference between earnings inequality and inherited inequality, and inheritance of wealth among the top 0.01% has become such as to generate a new crop of dynasties (highly visible among Hollywood and Rock brats in the pages of Tatler for some years now). Krugman also remarks that one difference between this New Gilded Age and the first is that income inequality now trumps asset wealth by numbers, though not by total worth: those managerial and financial classes who pay themselves multi-million-dollar fat-cat salaries far outnumber the 0.01% who live solely off ownership of huge corporations.

What struck me so forcibly was that Piketty's book and Krugman's review bring together, and make sense of, several disparate themes that I've been banging on about in this blog, and in my book reviews for The Political Quarterly, for the last decade: a crucial turning point in the mid-1970s when labour began to lose out, which is often blamed on the "oil crisis" but actually far more than that; and the concept of the "surplus wage",  paying salaries that are no longer remotely connected with productivity as a legal way to loot the assets of companies.

One of the more important books I've reviewed in recent years was Winner-Take-All Politics by two US economics professors Jacob S. Hacker and Paul Pierson, in which they painstakingly unravel the ways in which the Republican party helped turn the tide against organised labour since 1971, in the face of complacency, collaboration and incompetence from the Democrats. Contrary to conservative mythology it wasn't Reagonomics that turned that tide but a blunder by Carter Democrats in refusing tax and regulatory measures offered by Nixon that were more liberal than anything Obama can dream of. It was also a tax law of Nixon's that permitted clever and diligent Republicans to pay for George W. Bush's upper-class tax cuts by trapping the middle-classes in a higher tax band, thus turning them into enraged tax-cutters and paving the way for the Tea Party. By dominating those boring committees that actually run America, Republicans have permanently shifted the balance from labour back to capital. As Krugman has it:


"Nor is this orientation toward capital just rhetorical. Tax burdens on high-income Americans have fallen across the board since the 1970s, but the biggest reductions have come on capital income—including a sharp fall in corporate taxes, which indirectly benefits stockholders—and inheritance. Sometimes it seems as if a substantial part of our political class is actively working to restore Piketty’s patrimonial capitalism. And if you look at the sources of political donations, many of which come from wealthy families, this possibility is a lot less outlandish than it might seem."

And there you have the germ of my paranoia, "a lot less outlandish than it might seem". Krugman's statement is fairly radical for a mainstream US economist, in that it acknowledges that the Republican Party pursues class politics (a forbidden topic that neither party nor the US voting public like to hear spoken). My concern however goes way beyond that: is it "too outlandish" to suggest that a small cabal of libertarian Republican bankers and lawyers actually forsaw and abetted the crash of 2008?

Harvard Law School, Skull and Bones, Goldman-Sachs' boardroom, the ratings agencies, the Fed under Ayn-Rand-libertarian Alan Greenspan. It doesn't require the hypertrophied imagination of a Thomas Pynchon or a Bruce Sterling to conjure up from those ingredients the possibility, if not probability, of a small, informal clique with the determination, technical know-how and prescience to understand that unfettering mortgage-lending might bankrupt the public finances, thus cripple the State's regulatory capabilities and open up a once-only opportunity to reverse all the gains made by labour over the course of the 20th century...

The conclusion of Piketty's book, more or less endorsed by Krugman, is that in democracies we could still do something about this rising inequality if we wanted, the more obvious measures being steep progressive taxation on both incomes and wealth, transaction taxes and the breaking up of monopolies (as was done by the Anti-Trusters before World War 1). But it's perfectly clear that the political will is lacking for such measures both in the UK and the USA, where both parties and electorate have largely bought into an anti-tax, austerity agenda. Add to this the fact that US democracy itself has now become so dysfunctional as to prevent any significant reforms from being passed.

To add to my paranoia, we're entering a period where our giant corporations are no longer the railroads and steel but in electronics, and they're finally poised on the brink of a technical revolution that's dogged both the radical political and science fiction imaginations for a century - the possibility of employing robots to displace human workers. Superimpose this onto Piketty's projections of wealth-concentration and dynastic succession and you glimpse the outlines of a very grim society indeed, dominated at one end by shanty-towns and favelas (the World as Detroit) and at the other by gated communities and private islands.

In that world only a minority of the population would be in paid employment, medicine and policing are privatised, and the suppression of civil disturbance is automated and terribly effective. Sounds like a script treatment for yet another dystopian sci-fi/action movie starring Vin Diesel, but it's not that far from the vision Guy Debord arrived at in his (paranoid?) Comments on the Society of the Spectacle in 1988. Another theorist I greatly admire was Thorstein Veblen, he who best analysed the first Gilded Age and influenced the first Anti-Trust movement: so I'll fade out to a characteristically sarcastic comment of his on unearned income:


"... in modern times and in the civilised countries, those immemorial principles of privilege equitably vested in the master class have fallen into discredit as being not sufficiently grounded in fact; so that mastery and servitude are disallowed and have disappeared from the range of legitimate institutions. The enlightened principles of self-help and personal equality do not tolerate these things. However, they do tolerate free income from investments. Indeed, the most consistent and most reputable votaries of the modern point of view commonly subsist on such income."

The Vested Interests and the Common Man (1919)