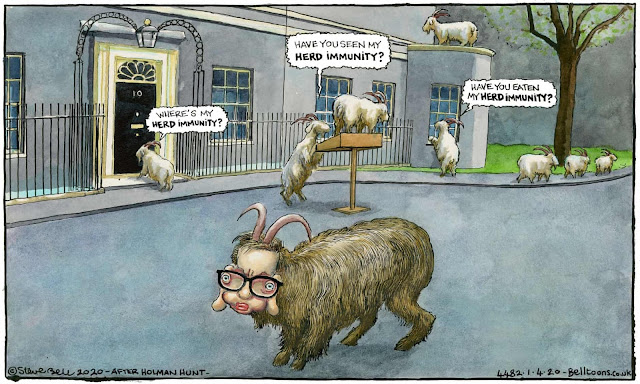 Steve Bell’s goats cartoon hits home because “herd immunity” was indeed the worst gaffe so far in the coronavirus emergency, a verbal disaster on a par with Hillary Clinton’s “basket of deplorables” which may have given us the Trump presidency and all that’s followed from that. Herd immunity is a perfectly respectable technical term in epidemiology: “ a form of indirect protection from infectious disease that occurs when a large percentage of a population has become immune to an infection, whether through previous infections or vaccination, thereby providing a measure of protection for individuals who are not immune.“

There are two huge problems with its use in this crisis. First, it contains the word “herd” which is grossly offensive when applied to human beings in a democracy, though perfectly acceptable when used in the abstract about biological systems. It has no place in any political discourse and deploying it was more or less like throwing a hand grenade into a crowded room.

The second problem is not of words but facts. The coronavirus appears to have a lethality around 1-5% of those infected (with much uncertainty until a lot more testing); a vaccine is probably 18 months away, if one can be found that works, so herd immunity will be the de facto result anyway as it is for flu and most other viral diseases. If around 80% of infections are mild or symptomless and the other 20% require hospitalisation, of whom a quarter may be critical, then a strategy based on what could perhaps better be called “community immunity” might have worked (as is being tried in Sweden). It could only ever be morally acceptable if those 20% are guaranteed plentiful and effective hospital treatment, but this was being contemplated by a government which has spent the last decade deliberately reducing the preparedness of the NHS through its policy of austerity.

But in any case it still could never have been politically acceptable in a country like today’s UK in the age of social media, where individualism and dread of such a horrible, invisible threat have largely eroded collective solidarity (already deliberately weakened by successive Conservative governments since Thatcher). Dominic Cummings and Toby Young notwithstanding, most of Johnson’s colleagues realised this – none too quickly – and performed a U-turn whose long-term political consequences are incalculable. Their mass destruction of jobs and small firms might shift us to the social-democratic Left or to the Far Right.

After 2008 the Left utterly failed to make its case for Keynesian reflation and allowed the Tories’ “household budgeting” metaphor to persuade the electorate to vote for austerity. As I write the new Labour leader has yet to be announced, but whoever it is has an even greater challenge before them. Boris Johnson is chameleon enough to take on Keynesian colouring for a while, though it remains to be seen whether he can keep his party with him. But strident Left sloganeering while the virus crisis persists is likely to be counterproductive, and working out a really cast-iron strategy for holding the Tories to account after it ends must be the priority.
at April 01, 2020