DAMNED EVERY WHICH WAY 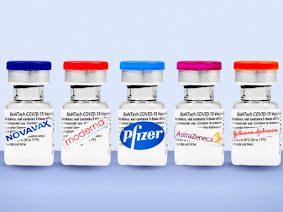 What feels like a very long year ago, in April 2020, I devoted my PC Pro magazine column to the looming Covid-19 pandemic, describing the way in which the official response was attracting competing advice from immunologists and social psychologists, the gap between what we needed objectively to do and what we could subjectively be persuaded to do. Looking back now the UK’s pandemic performance has been poor, with a relatively high absolute number of deaths and deaths per million compared to many other countries (see Our World In Data). It has been partly redeemed though by a roll-out of vaccination faster and more efficient than most.

In retrospect, carrying on scientific arguments about testing, social distancing, mask-wearing and vaccination via the mass media hasn't been so much “transparent” as a cause of mass confusion and destruction of public confidence. Consider a couple of random clippings about the pandemic I’ve collected from newspapers:

"Around 8% of participants in the AstraZeneca efficacy trials were aged between 56 and 6 years old, only 3 to 4% were over 70. This does not result in an efficacy of only 8% among seniors.”

How much information such reports impart to most readers must be doubtful -- people whose daily lives don’t involve mathematics aren’t generally very good with percentages, tending to think of them as additive when in fact they’re multiplicative. “30% more deadly for some people” isn’t entirely meaningless, but all it actually means is simply “be afraid” (that trigger word “deadly”) while giving no idea whether you in particular need to fear since “some” isn’t quantified: is it 10%, 50%, 80%? And the AstraZeneca clip, strewn with figures like pepperoni on a pizza, made my eyes glaze over (and I’ve been tutored in statistics).

Statistics are employed precisely to iron-out individual differences, so they tell us how many people on average are likely to get sick after catching the SARS-CoV-2 virus, and how many of those on average are likely to die of it – hugely important to people who have to plan allocation of hospital beds, PPE and so on, but not so to non-technical citizens whose own personal chance as an individual is what matters.
Stats don’t quite offer nothing though, because the one area where most non-technical citizens do intersect with statistics is sport: batting averages, betting odds etc. Hence it’s not too surprising that as the world’s pharmaceutical companies continue trials of the 200+ Covid vaccines currently under development, the efficacy figures they release are being interpreted by both media and public as a competition. Give people numbers and they’ll play games with them (anyone remember bus-ticket poker?)
Despite the unprecedented speed with which they were developed, all the Covid vaccines now in use have been thoroughly tested and shown to produce immunity, with those that failed testing either abandoned like Australia’s UQ/CSL or delayed for further work like the French Sanofi. All the pharma companies whose vaccines do work are obliged to publish efficacy figures, which immediately become a horse race: Pfizer in the lead on 95%, Moderna coming up on rails at 94.1%, Astra-Zeneca hanging back at 72%. These figures actually tell you what percentage of the test group didn’t catch symptomatic Covid, but they’re not directly comparable because their test groups differed in size and age composition. Then there’s the question of two doses versus one and what interval between them, which for a while became a dog fight with advantage shifting by the week: Pfizer went down to 52% for one dose, but then back up to 90% on the same test figures. Being exposed to this level of detail does nothing but increase popular fear.

The problem has become especially acute since the discovery of a rare blood clotting condition in a very small number of people inoculated with the AstraZeneca and Johnson & Johnson vaccines: use of these vaccines has been restricted or paused in several countries, and the gift to anti-vaccine propagandists has been enormous. Sensational press reporting of this problem has severely damaged the reputation of vaccines that have several advantages - in storage, dose number, price or licencing - over the others. This PR disaster is well explained in the theBMJ journal, and should you want a (highly technical) further explanation of the clotting issue, there's this in The Atlantic magazine.

All the current vaccines are good enough, even with one dose, to reduce hospitalisation and transmission, preventing health services being overwhelmed, moving us closer to a level of community immunity that could demote SARS-CoV-2 to a manageable endemic virus like seasonal flu. Whatever you do though, don’t call this “herd immunity”, even if that is the epidemiologists’ preferred technical term. Most Brits are individualistic to the verge of anarchism, and sentimental, and competitive, so “herd” is deeply offensive, almost a swear-word. It makes extreme libertarians, who form a sizeable sect within the current ruling party, start frothing at the mouth (which you can easily detect because they won’t be wearing masks).

Shocking as it might feel to say this out loud, at 1 to 3% mortality Covid isn’t lethal enough to terrify most people under 50 into properly conforming to test, trace and isolate, but it is quite lethal enough to trigger empathy towards the old and the vulnerable, and this being so any government will be damned every which way when trying to decide on lockdown easing or vaccine distribution.